Pros and Cons of Solar Gain

Solar gain is the name given to the increase in temperature in a space, object or structure due to solar radiation, i.e. the heat from the sun. In buildings this heating is the result of short-wave radiation heating the interior of a building directly through an opening such as a window or indirectly heating the fabric of the structure or both.

A building can retain this solar gain by having high thermal mass or can avoid it by using reflective materials and insulation. Both have their use depending on the heating needs of the building and whether the building requires heating or not.

Solar gain passively heats using free sunlight, so it can be a very cheap way to heat a building, However as it is reliant on amount of direct sunlight available, it cannot often be used as the main source of heat.

If a building would benefit from the heat from the sun, construction materials which transmit this radiation should be favoured and the building design should be such that the structure will be exposed to as much solar radiation as possible. We’ve listed below some of the ways to increase solar gain when designing a building or refurbishment.

Windows should be positioned and sized in order to provide as much solar gain when heating is required. To achieve this, glazing should be designed not to block solar heat gains and utilise the sunniest side of the building as much as possible.

It should be noted that at certain times of day and at different times of the year, even in cooler climates, too much solar gain can cause overheating and for this reason, Part L of the UK building regulations places restrictions on the amount of glazing that can be used in buildings.

Solar radiation increases the temperature in an area due to the short wave radiation from the sun.

The orientation of a building can have a significant effect on solar gain. Orientating a building so that the majority of sunlight strikes the side on the greatest structural area of the building will allow greater solar absorption.

As openings are generally the greatest direct form of solar gain, especially through windows, the size, position, orientation and materials have a significant effect on solar gain. In all building design, careful architectural consideration must be taken to balance these building elements with desired solar gain requirements.

The choice of materials & insulation

In hotter climates, solar gain can be beneficial during winter, however, with longer sunlight hours and more intense sunlight during the summer months it may create the problem of overheating and the need for ventilation and cooling systems. This is where reducing solar gain becomes important – below are some of the ways to achieve this.

Solar gain can be reduced by:

It is possible to use special reflective glass and architectural features such as shading in the form of porches, screening to limit solar gain. In hotter climates or summer months, the use of awnings, shutters or even curtains may be used as certain times of the year and day to limit solar gain.

The planting of deciduous trees in front of windows, well-designed window apertures or using shading screens can be used to limit high-level sunlight during summer while allowing solar gain from low-level angle winter sunlight.

If a building is well insulated, then the heat gains achieved through windows and openings will be contained; however, heavily insulated walls also reduce indirect solar gain through the fabric of the building structure.

Passive solar design is an aspect of passive building design focusing on factors, materials and construction techniques which maximise or minimise the heat energy from the sun’s solar radiation.

Passive solar focuses on building design where the heat energy from the sun is maximised or minimised. In the summer, deciduous trees in front of windows are used to block the sunlight.

In the winter, the leaves have fallen off and the trees let heat gains from the sun through.

The thermal mass of the building may be utilised to even-out heating and cooling requirements throughout the day by storing solar gains accumulated during the daytime and then releasing them slowly during cooler times, such as night time.

An example of such a thermal mass is a “Trombe wall”, where a wall is built on the winter sun side of a building with a glass external layer and a high heat capacity internal layer separated by a layer of air. 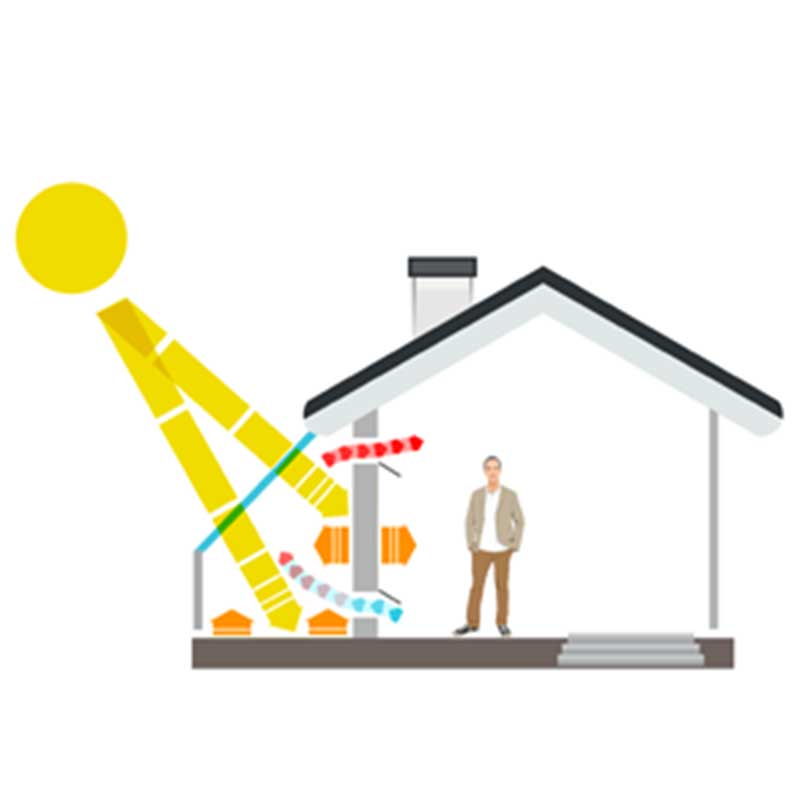 Utilising thermal mass to store solar gains accumulated during the day and releasing these during cooler times by creating a Trombe wall evens out the heating and cooling requirements of a building.

To increase heat gain, glazing can be used, where the composition and coating of the glass is designed to elevate the “greenhouse effect” whilst its size, position and shading can be used to optimise solar gain. Solar Gain can also be transferred to a building by indirect or isolated solar gain systems, such as solar panels.

Solar gain can change the heating requirement of an area rapidly, creating the need to either open windows to lower the room temperature or turn on the heating on less sunny days to increase the room temperature. This means that, in a room or building which is significantly affected by the heat from the sun, the heating system needs to be responsive by heating up and cooling down quickly. Fast response to heat gain via solar is a key element of an energy efficient heating system. Zonal temperature control, where each room is controlled by its own thermostat, is highly important because heating needs vary from room to room.

Electric underfloor heating and low-profile water-based systems such as Total-16 Low Profile System are the best heating solutions for passive solar design buildings as they allow for quicker cool down than screed systems which have at their centre a larger thermal mass which sometimes result in overheating. Underfloor heating also allows for zonal heating where each room temperature can be set independently from other rooms to accommodate for possible heat gains.

If you’re interested in a new heating system, our expert team is available to help you find an underfloor heating system that meets your project specification.

Underfloor Heating from the Worlds Best selling Brand, Warmup, starts from less than £200 and costs less than £20 per year to heat a typical bathroom floor – all with a lifetime warranty”.

Find out more
Categories : Improving the Efficiency of Your Home

To receive these expert articles straight to your inbox, subscribe to our newsletter here.

We use cookies to ensure that we give you the best experience on our website. If you continue to use this site we will assume that you are happy with it.OkRead more